Can I Ask You A Question? 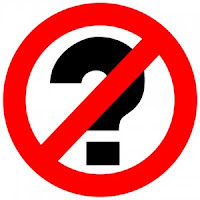 I recently ran errands with my six-year old son.  During our drive questions poured out of him and he fired them off as fast as I could answer him.  "What would happen if all the buildings in the world were made of Jello?"  "How tall are tornados?"  I stopped him long enough to tell him that I love his questions and I’m glad he likes to ask me about things.  This put a smile on his face and a fire in his heart to hit me with more questions.  While I admit that after a time the sheer volume of questions can start to annoy me, I’m hoping my continued availability will encourage him to keep coming to me with questions as he advances on into his pre-teen and teenage years and beyond.  Call me naïve but I’ve seen what can happen when questions are not welcome in a relationship.

"If you aren't answering questions, someone else is"

Questions are too often perceived as a challenge to one’s authority or they serve as proof of our insecurities.  Weak bosses and leaders tend to distance themselves from people who ask them tough questions because they perceive questions as lack of support or a lack of belief in the vision or manner of doing business.  Insecure spouses get angry or defensive when their significant other questions any part of the marriage relationship or certain behaviors.  Parents are quick to equate their teenager’s questions with a rebellious spirit.  In each of these scenarios the questioner learns that their questions are not welcome based on the negative reactions of those they have questioned.  So, eventually, they quit asking.  As a result employees do not feel they or their thoughts are valued and become less invested in the success of the organization, spouses live with unresolved tension, feel unappreciated, and finally come to believe they are simply coping with an unhappy marriage, and teenagers disconnect from parents who don’t know, don’t care, or don’t understand them & their issues.  All are left to come up with their own answers to avoided questions, a.k.a. assumptions.

While it is true that some people use questions as a method of attacking, it is my belief that the majority of questions are not a sign of doubt but rather a sign of learning.  The best time to speak into someone’s life is when he or she asks questions.  I have committed to always having an answer to the questions that come my way, even if my answer is “I don’t know but that’s a great question.  Let’s talk about that some more”.

If people aren’t asking you questions it’s either because they already think they know everything they need to know, they have been taught that you aren’t open to questions, or worse yet they believe you don’t know the answers.  Regardless of their reason(s) the troublesome fact is they are operating apart from you.  Just because you have silenced your questioners does not mean that the questions are not still there.  The scary thing is that if you aren’t answering questions, someone else is.  A questioner feels worthwhile and valued by the “someone else” who takes the time to answer.  So, workers quit and find employment elsewhere, spouses gravitate towards people to listen to them and have affairs, teenagers lock themselves in their rooms and get all their information from peers and predatory voices online.

The moment I no longer allow my wife, children, co-workers, or employees to ask questions (especially the tough questions) I have effectively silenced my voice of influence in the life of the truth seeker.  What do the questioners of your life reveal about you?  Are questioners welcome? Are there even any questioners in your life?  If not, it’s either because you are the world’s best communicator or you are avoiding some uncomfortable truths.

The Measure Of My Success... It's Not You.

I have found that there are many parallels between what leadership experts claim will revolutionize a church, business, or organization and what relationship experts claim will revolutionize a family or marriage.  Take for example the trending topic of change.  I have set in rooms with organizational leaders who ache for a change that will bring growth or at the very least bring the organization in line with the goals and values of said leadership.  I have also listened as couples desperately detail the need for change in order to save a deteriorating marriage.  Both groups find themselves mistakenly looking at those around them as the measure of their own success.

"Unless you value control more than you value integrity"


Volumes of leadership books detail behaviors and attitudes guaranteed to bring success.  Counselors and self-help books provide direction and unselfishly dole out answers to the difficult “How” questions for marriages in crisis.  Eager leaders and desperate couples devour the advice waiting for the miracle to take place; organizational growth, increased revenue, a healthier more loving relationship.

The often unclear and unspoken principle that should fuel proper healthy growth is that all the answers and profound advice point to an individuals way of being that is simply the “right thing to do” or the “right way to behave”.  The problem with leaving this principle unspoken is that the measure of our success when "doing what is right" shifts to focus on whether or not others are responding to our changes the way we want them to respond.  The end result?  Spouses quit doing what’s right because “she still nags” or “he still has a short fuse”.  Leaders embrace old familiar habits because “employees still complain”, a project fails or a task gets overlooked.

"...to make the individual a better person first and a better leader or spouse second"


What proponents for change must realize is that the advice and answers they are given for their issues are designed to make the individual a better person first and a better leader or spouse second.  If attempts to bring about change are embraced with the main goal of “fixing the other person” then change efforts will not be sustained long enough to bring about true change in the person they were intended to fix… You.

My childhood pastor used to say that “bitterness is like swallowing a poison pill and hoping it kills the other person”.  The same futility will destroy a person who attempts positive change habits (doing what’s right) in an attempt to change someone else.  I hope to see more people doing what is right because it’s right, instead of only trying to do what “works”.  Unless of course you value control more than you value integrity.  I for one intend to do what is right because it’s the right thing to do and because I believe it will make me a better person, spouse, and leader.  My growth is the measure of my success; your growth is an added bonus.
Posted by Unknown at 12:12 PM No comments: